A team from Newcastle University took part in a session on work motivation run by Hapsis Innovation’s director, Rob Allen. The group is involved in IT innovation projects and professional development in web and internet related topics and have developed a varied portfolio demanding expertise in many different types of work. One participant commented that it was “a very interesting session – focus on individuals within the group and what motivates us was particularly useful.”

The group explored a number of well established and also more recent motivation models and research studies. For example what their interpretation of pictures said about their unconscious (implicit) motives, and how that related to their stated areas of satisfaction and dissatisfaction at work. One item raised was the extent to which they felt they could express ideas or feelings to their work colleagues.

Some interesting discussions took place, for example critiquing the ideas in Herzberg’s Hygiene/Motivator theory as explained by Herzberg himself on a video. The discussions reinforced research that
found little evidence to support Herzberg’s assertion that the “external” factors (such as the work environment) could only dissatisfy, and the content of the work itself was the sole motivator. However, in line with later work on job enrichment, intrinsic motivation through the interest and challenge of activities was seen to be of high importance within the group. 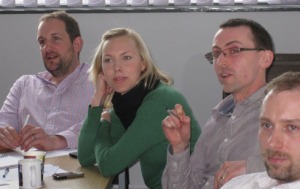 Topics such as the difficulty of the goal, the rate of progress towards it, or the value placed on the end outcome were explored in discussions around cognitive models of motivation such as goal setting, expectancy and control theory. Addressing some of the more difficult aspects of “how” people are motivated can be tough to digest in a short session but as one participant reported it was “challenging but put across in an accessible way”

Challenged again to apply some of the theories to a practical work context, participants were asked to explain why they were more motivated to choose some goals over others from a list relevant to their work. They revealed interesting aspects of their own motivation such as the desire to exploit new business opportunities, produce published articles, or take part in sociable tasks.

Inspired by the session, the group are looking at what to do next and how they can take forward their knowledge to apply it in their work. One commented they “would be interested to explore more about things that allow people to control what they do in the workplace to remain motivated”, so watch this space and we’ll see where it takes them!

This entry was posted on April 20, 2011 by hapsis in teams and tagged motivation, perceptions, personality, teams.